History of Vigilant Fire Company, No. 1

The Vigilant Fire Company was organized in 1893, and later incorporated in 1896. During these earliest days of the company, a four wheel pump cart was used to help fight fires. It took four men to operate the hand pumps, which had to be hand-pulled to a fire scene by firemen or horses. It was convenient that Henry Frey’s bakery was at 615 Main Street, just down the street from Vigilant, his horse, which was used for deliveries, was often pressed into service when the alarm sounded. The hand pump remained in operation until it was replaced in 1920 by a motorized fire engine.

The first audible alarm at the company was a large metal wheel rim off a railroad car from the Gardenville Yard of the New York Central Railroad. When a fire was spotted, the first member to the hallwould take a solid metal pole and smack the hollow metal wheel rim. The sound was unique and loud, and it carried for long distances.

Vigilant was one of the first fire companies in the area to install an alarm system. Each alarm box was numbered, when an alarm was turned in, a bell in the steeple of the United Church of Christ would toll out the number of the alarm box. For example, if box 24 was pulled, the bell would toll twice, pause, and toll four additional times. Each fireman had a white card showing the box numbers and location. If the fire apparatus had already left the hall by the time they arrived they could respond directly to the scene of the fire.

As much as Vigilant Fire Company was formed as a protection against fires, the company evolvedinto a center for social gatherings in the early years. The social environment of being a member still exists today, but in a much different manner. One has to imagine those early days in order to get a proper perspective of the times – no television, no cars, no radios, no computers, no refrigerators, no microwaves…and water had to be hand pumped. Well, you should be getting a pretty good idea that the community needed to entertain themselves. Vigilant served that purpose.

Music played an important role in the days before radio and television. At the time of the Armistice (November11, 1918) which marked the end of World War I, the members of Vigilant formed a band and drum corps. They purchased their instruments from Denton, Cottier, & Daniels Co., on Court Street in downtown Buffalo. Al Richt, Bob Pletcher, and Val Eich were the leaders of the drum corps and providedmusic lessons to the other members. The principle instruments included the drums, bugles, and fifes. The band played at the hall during the welcoming back party for the soldiers who in the war.

Sports was a major attraction for firemen of old, just as it is today. Back then, instead of watching games on TV,they played it themselves. The fire company sponsored a basketball team from 1921-1922 and the hall was converted into a sports arena. They played teams from neighboring fire companies and the city of Buffalo. The best players from Vigilant included Jim “Doc”Ehinger, Ed Mund, Earl Frey, Hal Webber, and Henry Moeller. Following each big game there was music and dancing. Vigilant Fire Company was renowned for having one of the best dance floors in Western NY.

During the early years a popular way of socializing and raising money was by holding card parties at the hall. PENDRO was the game most liked. The card and dance parties continued through the 1950s. After the card party there was dancing to live orchestras. During the 1930s, the Charleston, which was a popular dance and considered risque by some was banned at the hall. Not because it was risque, but because the hall floor would buckle when everyone danced to this tune.

Donations are now being accepted for the 2021 Annual Fund Drive. 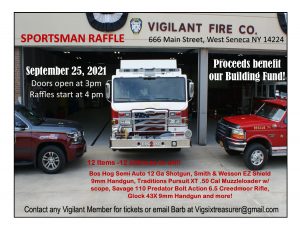